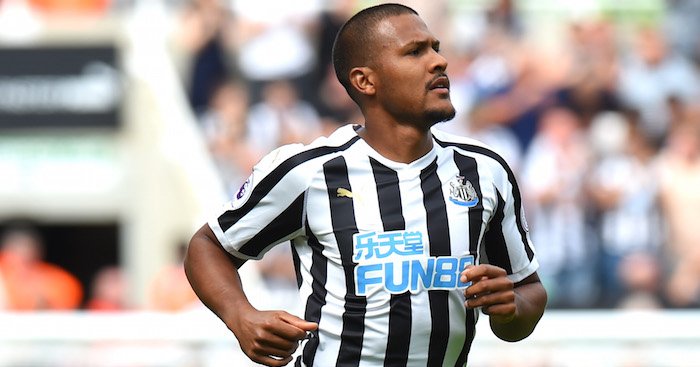 NEWCASTLE UPON TYNE, ENGLAND - AUGUST 11: Salomon Rondon of Newcastle United runs off the ball during the Premier League match between Newcastle United and Tottenham Hotspur at St. James Park on August 11, 2018 in Newcastle upon Tyne, United Kingdom. (Photo by Tony Marshall/Getty Images)

Salomon Rondon’s permanent destination has been revealed by bookie Sportnation.bet – and it appears Newcastle could be left frustrated once again.

The in-demand Venezuelan who has top scored for the Toon on loan this season is wanted by a host of Premier League clubs – while a potential return to Spain or even chasing the big bucks in China is on the cards.

The bookies have made Everton the favourites (3/1) to sign the 29-year-old as they look for an out an out striker, with Cenk Tosun’s future on Merseyside up in the air.

Newcastle are second favourites at 4/1 to make his loan move permanent but Premier League survival and whether Mike Ashley is willing to spend the £16m asking price from West Brom remains to be the question.

A potential move to London is on the cards with both Crystal Palace (4/1) and West Ham United (5/1) needing some fire power and to stay a Baggie after the loan at Newcastle is priced at 8/1.

Elsewhere, Villarreal (10/1) and Valencia (12/1) could tempt the Magpie’s leading goalscorer this season with a move to Spain while heading to China with Shandong Luneng is a long shot at 20/1 .

A Sportnation.bet spokesman said: “Newcastle would be best placed to snap Rondon up permanently as he’s already a cult hero on Tyneside – but the odds suggest there are any number if the other clubs keen on the Venezuelan could pip Rafa Benitez to the post.

“If that happened, the ill-feeling at St James’s Park would go through the roof – but a lot depends on Premier League survival. A solid top flight outfit like Everton, without a designated striker themselves, would be a much more attractive option for Rondon and West Brom should they decide to sell.”