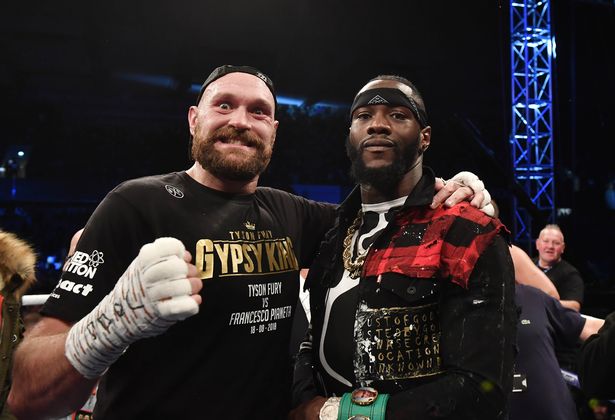 Wilder defends his WBC world heavyweight title against lineal champion Fury at the iconic Staples Center in Los Angeles, California in by far the biggest fight of 2018.

Where is it?
Staples Center (Los Angeles).

One criticism levelled at Wilder throughout his career is the relatively mediocre opposition he’s faced to get the top – Bermane Stiverne and Luiz Ortiz representing his sternest tests yet. British fans will also remember the Bronze Bomber’s spectacular one-minute knockout of Olympic gold medallist Audley Harrison in 2013, which ended the heavyweight’s career.

Fury boasts arguably the more impressive CV, with scalps of Kevin Johnson, Dereck Chisora and of course Wladimir Klitschko to his name. His rise to the top of boxing’s ranks has taken him to Ireland, Canada, the US and Germany.

What are both fighters saying?

“I can walk around here, and I can talk as good as any man in the country,” Fury said.

“But when it comes to a fight, it’s going to be a hell of a fight. Deontay Wilder: massive puncher. Me: skillful boxer. It’s going to be an epic night. This is a legacy fight … and after I win, he’s going to hire me as his publicist because I do believe I can promote Deontay Wilder back to being heavyweight champion of the world in no time.

“But there’s no shame in losing to me, because I am the greatest boxer of my generation and I can’t be beat, especially not by him.”

“He’s great for the heavyweight division,” Wilder said of Fury.

“He’s charismatic. He can talk. I’ve got a great dancing partner. He’s fearless in the ring, and he’s got a background of boxing in his blood. It’s good that he’s from another country so you get to see different cultures, different personalities from the two of us.

Who is on the undercard?
Luis Ortiz vs Travis Kauffman